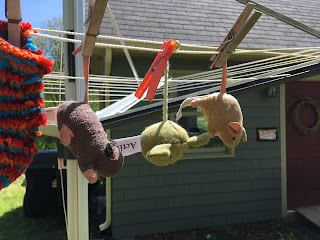 We have cats. 2 lovely Bengal cats arrived in November and have been training us ever sense.  Currently we bough Princess Leia a new toy, so I took this opportunity to wash her current arsenal of fetching mice. The girl fetches! With enthusiasm!

They have been and continue to be intensive. They were around a year old when we got them. She was 8 months, had just weaned her first litter and was pregnant with her second. Didn't know about the pregnancy, That popped up when we had them both fixed. She was just started, so I think it worked out well in the end. She had also been sleeping with her brother. Neither of them knew, and we haven't told them. So embarrassing! And not their fault. Some people are not cat worthy.

They had been living in a small apartment with 2 pieces of furniture and high, small windows with no ledges. Therefore they fell down the stairs for the first few days and were amazed by space. We have space.

The first few months saw a lot of bloodletting and skin exfoliation. Bengals are very physical cats with fierce independence and a need to burn off energy. They were not in the least social. As we told visitors - 'They bite, and they scratch. With intention."

So why are they still here? They are the most lovely, entertaining and dedicated cats ever! We do nothing in the house without close, constant supervision. Ollie can unpin my sewing faster than I can, and he is so proud! He distributes sewing notions about the house and has been seen carefully depositing them in my handbag or DH's lunchbag. They chase anything, especially flies. They talk, they indicate their needs with 1 small claw carefully placed on your calf, they now cuddle and will endure being picked up for at least 20 seconds. Sometimes. They are smarter than any cats I've ever know, and I've know some really great felines. We are truly in love with these cats.

Now Ollie was quite aggressive and active when we got him. Dh researched cat wheels and tried to order one, but they were badly backordered. He had to tackle the chore himself and accomplished the task in amazing fashion! We were worried about Ollie knowing what to do. DH brough it in the house and Ollie hopped on before it was in place or installed. Now the lap counter tells us how much he loves it and he has calmed so much. He has a need to be admired when loping along and gets off the wheel for pats regularly. Also, like a 2 year old he watches us closely to see if we are watching.

Here they are, about to jump each other again. I had to make a think bedspread so we have some protection at night. Now that they have learned to cuddle they will crawl under this and then attach any moving toe they find. Life is more complicated now. 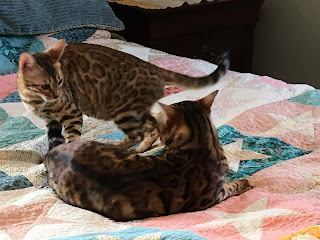 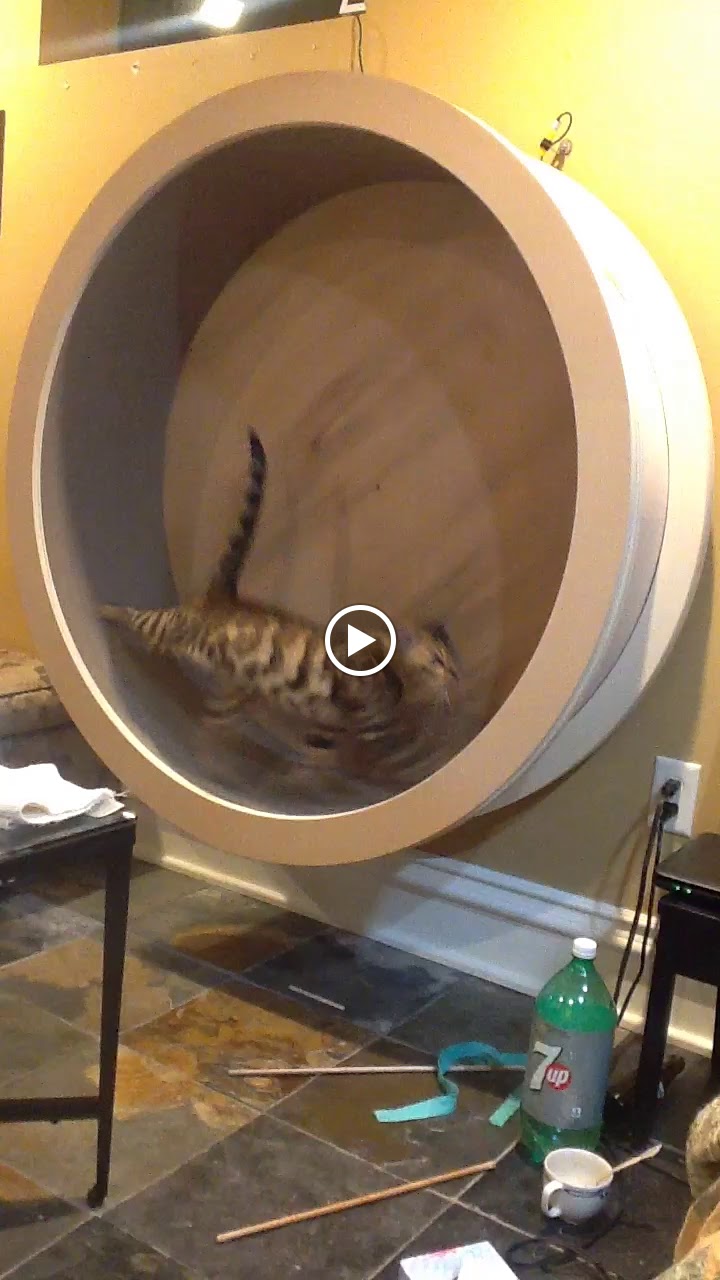