Big embroideries are easy to do until you are lulled into an air of complacency by the mindlessness of thread changes and bobbin refills. Just as everything is going oh so well, you forget what thread comes next.

Well, you don't forget so much as lose track of the substitutions you made, because no one in real life has all those colours in the one brand listed by the embroidery company. No One! Plus, who embroiders only when the shop (preferably located next door) is open and having a really big sale. We buy when we can. We make do when we can't.

I have threads from 3 big companies and a few orphans that looked cute at the time. I hate comparing thread charts and just exactly what is one to do when even the thread conversion programs can do some but not all of your needs? I eyeball the computer screen and throw caution to the winds. My colour choices are therefore not great but there's only so much tedious stuff this girl wants in her life.

So I finally got around to making a draft version of a thread red carpet. It worked fairly well so I may have to design and produce a more formal one in the new year. I pulled up the list of threads required for a cushion embroidery (15) and the thread change chart (28). It's not enough that I have to make substitutions but the substituted thread then has to reappear at the right time. I needed a mindless way to make that happen.

I took an old cutting board and flipped it over. I used a 2" grid and created a board of about 30 little boxes - numbered sequentially. Then as I decided which of the threads I do have was to make an appearance I placed them on their numbered grid. You are left with lots of unfilled boxes where threads need to make an encore performance. As I embroidered and finished with a thread I checked for its next position and placed it on the correct grid box or in the holding area for the next embroidery. You can see below that thread 1 is on the machine and that many of the first 12 threads will make a second appearance on the grid after they finish their first round. 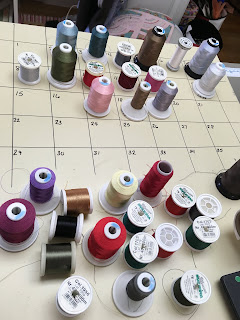 Now the thread in my hand did not (ever!) match the thread colour listed. I just referred to the colour number for that round and looked for the same colour number in a future position. I have to say it actually worked. Also, as all my colours were on the board together before I began I could note any glaring colour issues - like a green that just didn't look like it would get along with the other colours on the board.

I did not anticipate the attraction of this tool as a cat toy. You may want to take precautions. It can be devastating. 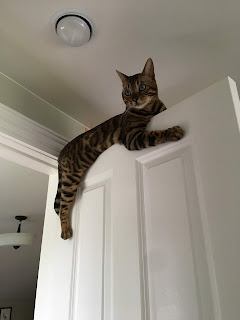