Tisket, tasket - I grew a basket!

Remember the yarn? Well the next morning I see a cute little moth flutter by in the kitchen. Oops!

I promptly tossed the yarn in the freezer and then dipped each ball in a mixture of pickling vinegar and salt for about 30 minutes. Rinse, squeeze, unwind and hang up to dry. Hopefully that was enough. I still think it was quite a buy and love it all.

I made a basket today. The NS Basketry Guild had a class on a traditional NS withe basket using red osier dogwood. I used some dogwood and willow grown in the backyard. It was rather sturdy stuff and I had forgotten how much strength that takes. It was a wrestle. I haven't made a basket in a while and a lot of the people were new. Many of them spoke french and did so. It was interesting to be in the minority for a bit. Quite refreshing! The basket is interesting, but beefy. J says I may need to have another look at the rim. We'll see. 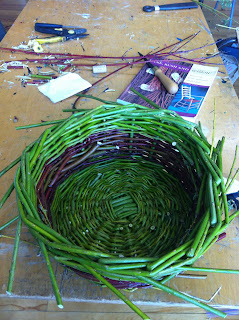 That is the actual colour of the willow and the dogwood.  Both were cut about a week ago. It might be a bit vivid in the pic, but it is fairly bright. It will fade with time.