I finished my coat! It was really fun. I know, I've been told it looks complicated, but it just went together so nicely and well - you look at the fabrics and colours and you have to admit - it's fun. I have no delusions about how it looks. It is truly an oddball, but I like it and I like wearing it. 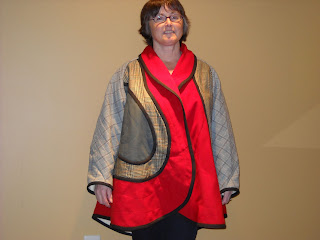 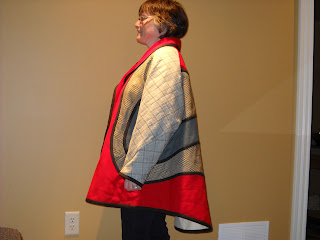 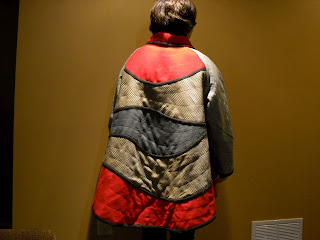 The first step on my road to success was to read the directions and throw them out. OMG what were they thinking! If I had followed their steps it would have taken years, ended up distorted, stretched and I think full of holes for a whole variety of reasons. I did have faith in the pattern pieces making up properly as I had sewn a Koos designed dress previously. He cuts a nice, precise pattern. I hope I never learn that he did the instructions. I could never reconcile that with the cut.

The coat was meant to be reversible, and it could be - but again, not the way they want you to proceed. I had a nice cozy cotton double knit for the inside and it had nothing about it that wanted to see the light of day. This made life easier. If you remember seeing it cut in my previous blog entry, you remember it was front and back in one jellyfish shaped piece. Therefore I cut out all the exterior fabric puzzle pieces and basted them in place directly on the backing. I then dug out some lovely cotton bias trim and stitched directly over each joined edge. The directions wanted you to pin, clip and seam each piece together. Just look at those curves! These are the thoughts of an insane person bent on bringing sewers to the dark side for their nefarious glee!

Anyway, that was the basic approach. His sleeves look rectangular but sew in a spiral. I had experienced this before, so I knew to shorten them on a bias line across the sleeve. The pattern says this cannot be done. What a lack of imagination! I needed to lose at least 4 inches, so not doing it wasn't an option.

So last night I wore it to Sewing Guild where it was well received by kindred spirits. The assembled also took time to critique the fit of my blue top (previous post) and were most helpful. You know you are in a room of experts when they look up at you talking about your fit problems and start waving their fingers as they discuss the needed corrections with each other. They gave me feedback and a whole new mindset in minutes. I had been working on fit questions with the expert at Wild Ginger and she was most helpful as well. However friends look at things differently. They want it to fit AND look good on you. They see the whole picture and play with fit to complement the good parts and lose the bad. It's almost the same thing, but not at all, really. They also have the advantage of pulling and poking the top to try new things. At one point I was actually hoisted by my shoulders and indeed, they were right!

So now I am off to sew sundresses. The Dominican calls! I must reply!
Posted by Lucille at 07:58