The Shirt Off My Back!

So Nocturne was a blast, as always! Tons of people out! I needed to spend more time planning our route, and I would have seen more in less time.  I missed the field of ceramic bunnies. It was a bit cold and I really paid for that the next day (and on and on) with an unhappy jaw. The highlight for me was the steamroller prints at the Dartmouth ferry terminal. The woodcut prints were carved from huge sheets of MDF. That stuff is tough to cut into! The skill was much better than I anticipated. I don't know why. I should never underestimate NSCAD. I'm glad they use Nocturne so well to demonstrate why we need to support them in our community. Our trip to their print (letterset) shop was impressive as well!

But back to the steamroller. They were doing large banner style prints and you could buy them for a reasonable price. I couldn't decide, and as they actually require a steamroller, placing an order after the night was not possible. However later in the night (as we were heading back to the car) they were letting people throw things in to be printed. I took the shirt off my back and printed the back. The front had princess seaming and I thought that might be a bad idea. Hindsight says I should have done the front, but now I look great coming and going!

Look at this process! They had a rather authentic guy driving the roller.  "Least likely to become an artist" written all over his yearbook! I think he came with the rental. The students rolled the carved wood with ink and this took time and a huge amount of muscle. They laid down the wood sheet and put the material to be printed carefully on top. They used a blanket for the first pass to absorb extra ink and rolled most things twice before peeling them off. 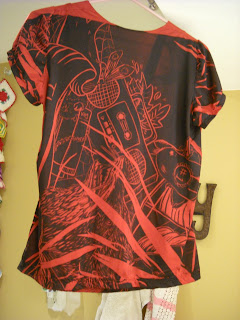 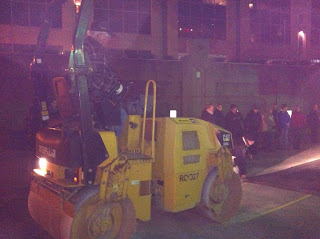 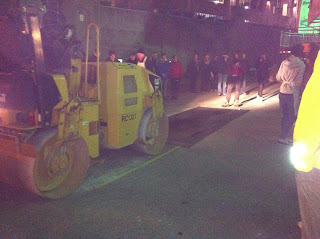 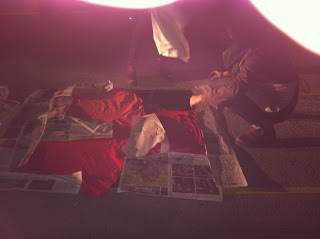