The Raptors are at it again. 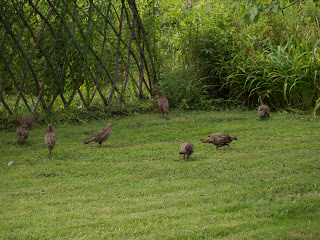 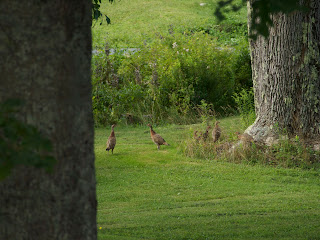 It's been raining lately (as usual) and I think that means the bugs and worms are at the surface. So now the pheasants/raptors spend the morning in the front yard snacking. Sometimes they just sit and sunbathe. Cars and trucks pass by about 30 feet away and they are not in the least disturbed. Currently the flock ranges from 8 to 11 and have been with us since spring. I wonder if we are doing the right thing to put out corn each day. They only get 4 cups for the whole crew and that isn't enough (I don't think) to sustain them. They supplement nicely with berries and bugs and whatnot from the surroundings. Are they becoming too dependent? Are they losing a healthy respect for people and traffic? After all, daddy was hit while crossing the highway behind us. Are we bringing up children who never leave home? Not that I want them to leave, but I do want happy, independent offspring who are capable of surviving whatever. Do all parents worry like this? And indeed, at 4 cups of cracked corn per day, I can afford this. DH went down to brush them back from the road a bit. They paid him token attention and crouched behind a bush for a minute. They look like 2 year olds playing hide and seek behind their own hands.
Yes, still dieting. Still a bit hungry. Still biking. I like instant gratification as much as the next guy, and hope I can maintain interest. I want to be in better shape and have to get serious about this, or resign myself to helpless little old ladyhood in the near future. Also, I love fashion and like to make my own clothes. I think they will look so much better if the rolls of fat along my middle smooth out a bit. Just saying.
OMG the pheasants have competition! I was just interrupted by this sight at the corn dump. That will teach the little guys to take corn for granted. I haven't seen him since the spring, but I know he's been around from the complete lack of strawberries and cherries in the garden and the foot prints everywhere. Figures he would be back so boldly during the day. The apple trees are ready. 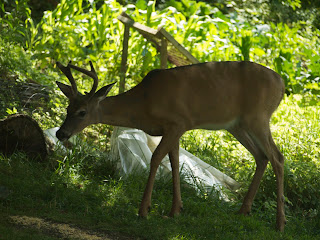